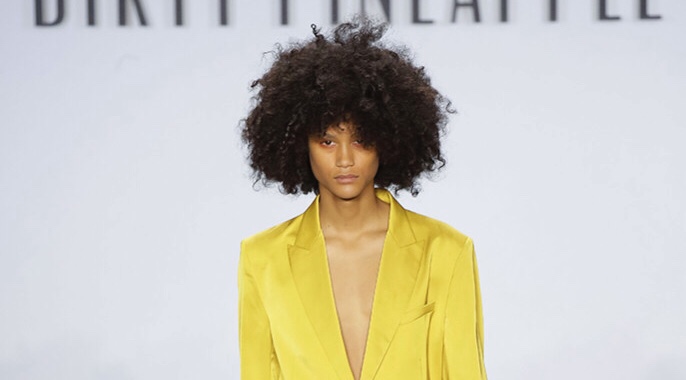 Dirty Pineapple was established in 2017 and is the result of a dynamic design collective made of Elsa Zai and Nellie Wang. The brand caters to a young and creative audience and has caught the attention of the press and consumers with it’s lounge suiting and vintage styling approach. With collections under the influence of different cultures, combined with high street fashion and creative matching, Dirty Pineapple aims to adapt to modern urbanites through a multi-layered mix of high-quality basic and innovative items.

Dirty Pineapple established itself as a messenger for forward thinking. A creator of inspiring equality through content, design, and message. A blur of contrast for the search of true beauty. A quest for a gender equal world in an unequal driven society. A universal, sexless uniform of personality and lifestyle. Creative campaign for a new world order. Taking inspiration from past, present, and future DP is looking to be the authors of their own story with fashion as their chosen medium - each collection will speak to a new chapter. 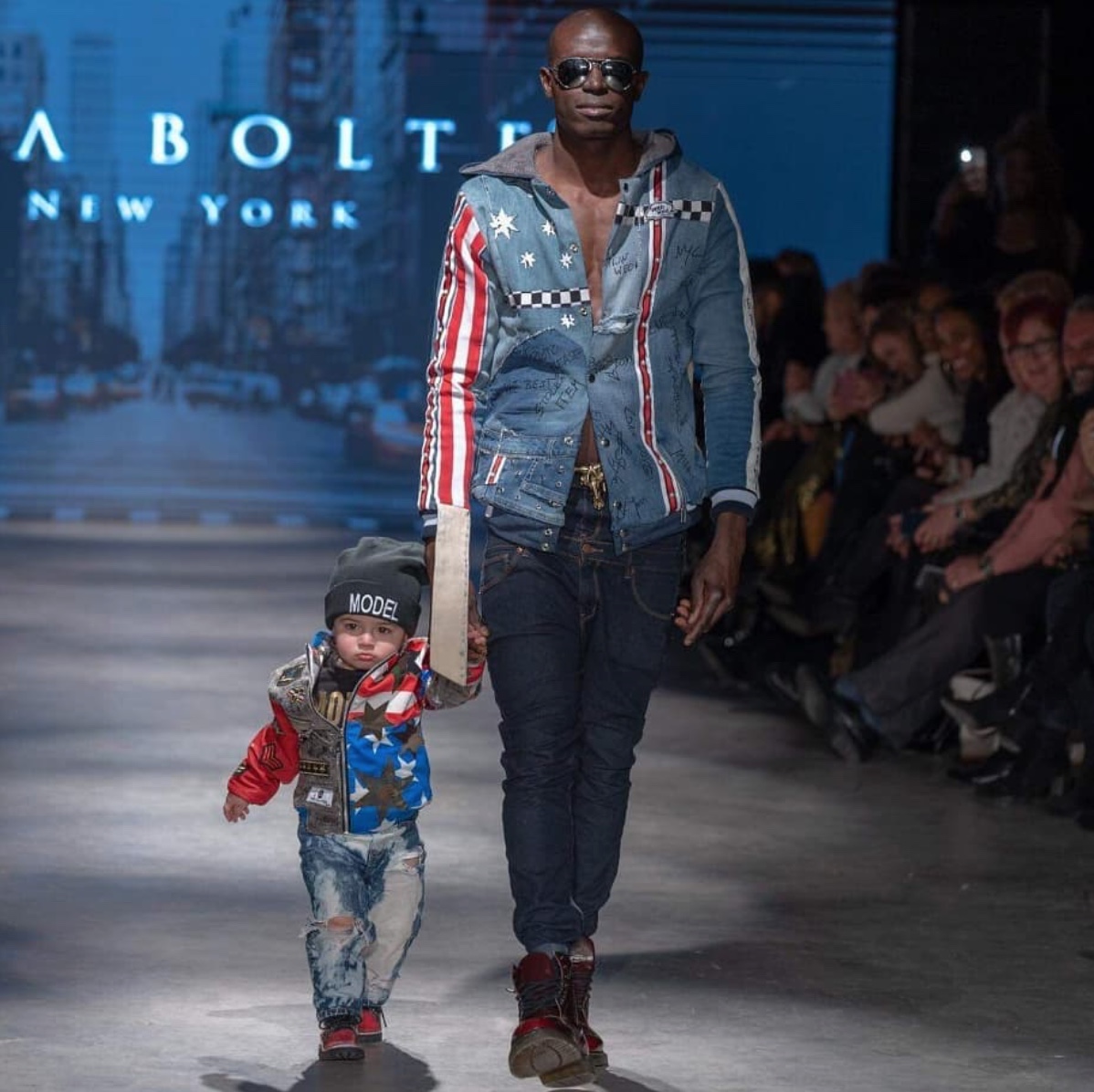 Germany based designer Pia Bolte started her career designing handmade, one-of-a-kind ‘Dirndl’ (traditional Bavarian dresses) for her ‘Herzi Dirndl’ label.  Clients quickly began asking her to design items they would be able to wear on a daily basis.

Since then she has created a variety of collections. These collections feature her trademark jackets which have appeared several times in New York Fashion Week including Society Fashion Week 2019. In her Fall 2019 Collection, each jacket is a one-of-a-kind, handmade, sort of a post-apocalyptic work of art. There were other recherché formal gestures, too, like luxe detailed lapels on jackets, the frothy frocks were emphasize in the women’s pixie dresses and body suits and she really drove home the patriotic flag symbolism throughout the collection.
A mix-mosh combination of leather, symbolic patches, textures and fabrics including denim and lace combined gives one the idea of how total chaos came together to form a perfect universe.
Perfectly matched, Pia collaborated with iconic shoe designer John Ashford who provided the footwear for all of the female models, and the Sultry Affair provided the eccentric accesories.

Her exceptional, creative approach to fashion has made her brand a success among her celebrity clients as well as fashionistas worldwide, this show made my Fashion Week one to remember. 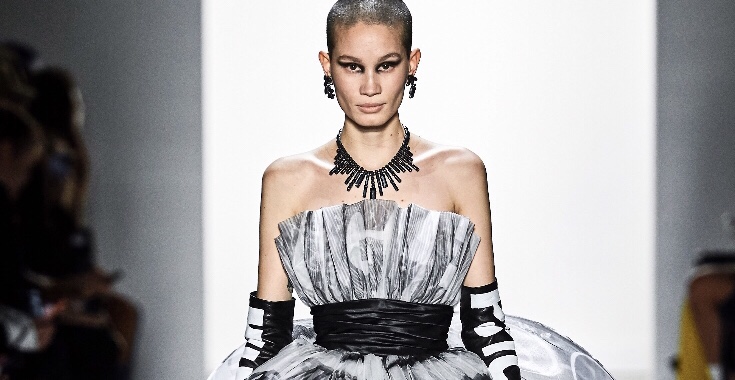 Though one may expect all sorts of surprising things from Jeremy Scott, it was impossible to prepare yourself for this collection’s shocking lack of color. With the exception of a few denim looks in faded blue, every item on Scott’s runway this time out was black-and-white. Newsprint black-and-white, to be specific.

Another something completely different here: the silhouettes. Though the collection boasted its fair share of lithe trousers and abbreviated skirts, of the typical Scott kind, what jumped out were the bouffant party dresses, with skirts of layered tulle silk-screened in newsprint patterns. There were other recherché formal gestures, too, like tux tails on jackets, but frothy frocks were emphasized, and they really drove home Scott’s notion that we media consumers are kind of wading through a fog these days. Newsprint-patterned puffers had a similar piquancy, and numbered among the pieces that seemed likely to find fans outside the fiefdom of Jeremy Scott loyalists. For all the concision of the palette and the tightly encircled theme, though, there was a quite a bit of variety in the collection’s technique—patches rudely slapped onto coats, distressing tearing up jeans and sweaters, fringe like scraps of paper, sequins embroidered to shape out bits of words. The irony may be that in directing a cannon blast at clickbait, Scott wound up designing clothes as tempting to the id as a headline like “39 Reasons Why Millennials Are Garbage.” Click.

Jiri Kalfar is Czech based designer, who originally trained to be a ballet dancer. He infuses his innate sense of style into garments with folk-art and rock’n’roll inspired prints and innovative cuts. His menswear is boundary pushing in terms of its fluid approach to gender identity and his womenswear celebrates the freedom of the feminine soul with free-flowing silhouettes and a vibrant palette.

Kalfar’s collections were featured in such magazines as Vogue, Elle, Harper's Bazaar, Nylon, L'Officiel, Forbes, The Financial Times, Schön, Tank, Hunger and others. Nylon selected his as one of the eight emerging to watch and L’Officiel France featured him as one of-the-new-wave emerging designers.

Jiri Kalfar previously shown at the London Fashion Week, where he dubuted his men’s and women’s SS18 collection "Save The Bees" which was well received by the press. Building on the success of his debut collection, he continued to show in London for FW18, and and his SS19 collections.

Jiri Kalfar is now entering the American market where he introduces his AW19 collection at New York Fashion Week.

Jiri is an animal rights activist and his products are ethical and sustainable. 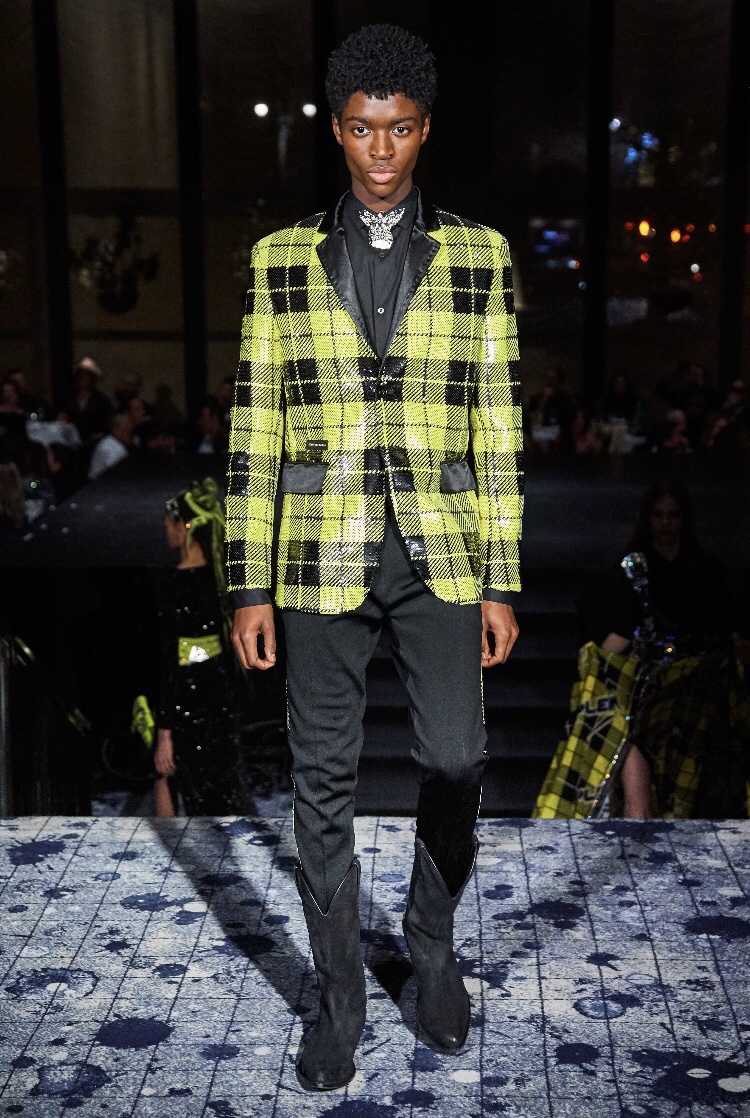 In the days leading up to Philipp Plein’s 20th-anniversary New York City fall show, there was drama.

The trouble concerned Kanye West, or rather Kanye West by proxy, and an allegedly fraudulent agreement that purportedly cost Plein nearly $1 million. The invite to Plein’s show made mention of a live performance by West. When his wife, Kim Kardashian West, kiboshed that claim on Twitter, speculation started to grow and reports surfaced that someone in West’s circle had apparently engaged in performance-fee negotiations, forged West’s signature, and obtained a deposit from Plein, all without West knowing. Or, that someone may have been Malik Yusef, a friend of West’s, who said the figure was $750,000 and that Plein had donated it to West’s nonprofit for a chance to work together. Yusef also claimed that the money had been returned. Was Plein pseudo-Billy McFarland–ed? Maybe. Are some people feeling a bit of schadenfreude? Likely. But it’s hard not to feel, to an extent, bad for Plein. He was just trying to throw a party. Did he want to comment on the situation? “Not really. In the end, the show is about doing something for the people, all my friends, and [putting] on something that represents us,” Plein said.

A lower-key night ultimately unfolded in Plein’s favor. It was a fun, somewhat casual (albeit black-tie dress code) get together at The Grill (the ex-Four Seasons restaurant), where guests ate, drank, and mingled. The pressure-cooker vibe that used to come with this designer’s shows was gone—Plein has, smartly, scaled back his theatrics in recent seasons.

The clothes were still brash, but mostly tolerably so. Plein said that this was his second cowboy-inspired collection—but in that, it wasn’t so nail-on-the-head. “There’s more of a focus on the sartorial,” he said. That amounted to more of a futuristic country-western: Dresses came dazzled and belted within saloon-style buckles, while bursts of neon tartan (like on a blazer) or color blocking (like on trousers) added an in-your-face jolt. The Plein moniker was given a sci-fi spur with a new font, while camouflage and animalia motifs worked its way in. Cowboy boots walked out with fluorescent leather detailing or elongated fringe, and there were some sharp-enough tuxedo jackets near the presentation’s end. The edit was all over the place, but nonetheless, this was Plein doing what Plein does best, and, thankfully, in a more relaxed way. He should keep going in this direction (also, kudos to him for a super-diverse cast). 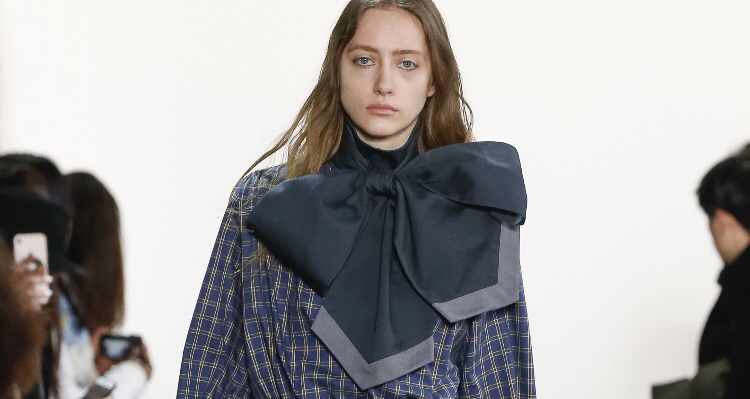