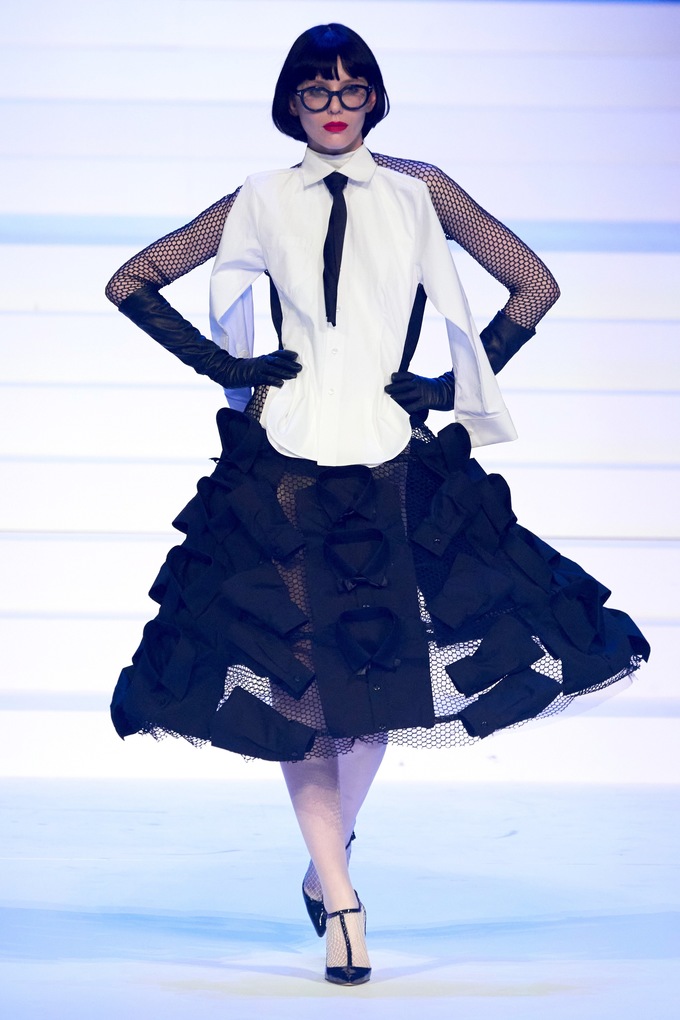 When Jean Paul Gaultier announced only days ago that his spring 2020 couture show would be his farewell to a career that has spanned 50 years of fashion on his own terms, France went into national mourning. What no one knew was that the designer would put on a grand finale show to remember.

But what a magnificently inventive, euphoric, and heartwarming spectacle it was—a celebration of all the values that this unique designer has embodied in his work through five decades of imagination, humor, humanity, and joy.

Gaultier showcased a breathtaking 200-plus looks, but who was counting? (“To be honest it was 10 times more bordello than my first shows that I did!” joked Gaultier backstage. “I knew I had too much and that after I will clean [edit]. But I didn’t clean—at the end I put it all in!”)

And it really was a show, staged in Paris’s storied Théâtre du Châtelet. Inaugurated in 1862 by Empress Eugénie, this was the stage where Nijinsky later debuted the scandalous L’Après-midi d’un faune and where Diaghilev’s ballet Parade opened with an innovative backdrop painted by Picasso—the perfect showcase for this great fashion iconoclast.

Meanwhile, up above, the first row of the dress circle was a diamond horseshoe of the couture house’s glamazon clients, all dressed to kill. Before the show started Ghesquière turned to Eva Herzigova to confide, “I was your dresser at my first Gaultier show,” in his days as a junior assistant. “It is a very emotional moment,” Ghesquière added. “He inspired us all, and he gave me my first big break.”

Many of the conversations we are having today—about such issues as diversity, gender fluidity, recycling, and sustainability—are built into the Gaultier DNA. Since his first show in 1976, he has shown pan-generational models of all sizes, genders, and ethnicities on his runway, because they reflected the real-life people on the streets who inspired his style.

As Gaultier explained backstage of those anarchic early collections, “I was recycling things, because at the beginning I had no money. So I was taking things like jeans and camouflage and doing funny things with them—and now I did that with my couture!”

He has put men in skirts and turned the corset from a symbol of the oppressed woman to that of the woman (or man) who is absolutely in control. He famously dressed Madonna in a conical bra for her 1990 Blonde Ambition Tour; although he debuted the fashion look on his fall 1984 runway, he had first experimented with it on his childhood teddy bear (he used newsprint at the time), as revealed in the playful opening sequence of his 2018 cabaret, Fashion Freak Show, at Paris’s fabled Folies Bergère—a popular success here and perhaps a hint at a future career.

As Gaultier promised, he took the ideas that he first explored on a shoestring budget and amplified them with all the technical wonders for which his remarkable haute couture ateliers are famed—and this is a designer steeped in couture, having worked alongside Pierre Cardin at the tender age of 18.

The collection opened with a sequence from photographer William Klein’s 1966 fashion-world spoof Qui êtes-vous, Polly Maggoo? featuring a fashion shoot starring Peggy Moffitt and other model luminaries of the age staged as a funeral. Then a real-life tableau of mourners formed onstage (arranged by famed choreographer Blanca Li), among them many of the iconic models who have brought their spirit to the Gaultier runways through the years, dressed in upcycled pieces from the designer’s archive. Among the black-clad crowd, one could spot Gaultier’s catwalk icons through the decades, including Anna Pawlowski (who modeled in the designer’s very first shows), Farida Khelfa (in faultless black smoking pants), Claudia Huidobro (as Frida Kahlo), Christine Bergström, Laurence Treil, Chrystèle Saint Louis Augustin, Estelle Lefébure, Yasmin Le Bon, Erin O’Connor, and the high-stepping Tanel Bedrossiantz (who would steal the stage later in a black leather biker jacket with one sleeve transformed into a proudly feathered cockerel).

The group was posed into a frozen tableau, but one mourner couldn’t stop himself moving to the orchestra’s beat. It was Boy George, who then broke into a stirring rendition of Amy Winehouse’s “Back to Black.” (“I love him,” Gaultier explained backstage, of his excitement when George agreed to perform for him. “For me he’s a very good representation of an English eccentric, and England and English people have been my inspiration always.”)

Six burly pallbearers appeared bearing a coffin with a lid humorously pierced with two giant metal cones, as though the corpse were wearing a Gaultier bra. The pallbearers then turned frisky, breaking into an amazing rubber-legged dance before setting the coffin upright on the stage. Karlie Kloss stepped forth from the crowd in a shapely black smoking jacket that bore a traditional French funerary wreath on the back, its ribbon bearing the legend La Mode Pour La Vie (“Fashion for Life”). She then opened the coffin to reveal the very living occupant dressed in Look 1: a baby doll dress literally composed of dozens of infants’ dresses in the same style—a symbol, perhaps, of a reborn couture.

Then followed a master class in recycling, Gaultier couture style, including New Look jackets mounted flat on the front of bustiers with skirts formed of streamers of old-fashioned black silk stockings or opera kid gloves; a patchwork bodysuit with a bodice made from gentlemen’s vintage silk-foulard ties; a miniskirt formed of collaged biker jackets; and jean jackets and pants cut out to encircle the body in crinoline hoops. or treated like fine lace in a miraculous tour de force of handwork, or worked into a matador jacket worn by a male dancer who wowed the crowd by walking in ballet pointe shoes. On pointe.

Subsequent passages all played with the leitmotifs that Gaultier has made his own—the corsetry that has obsessed him since he first admired the girdles worn by his beloved grandmother Marie Garage. The famed blue-and-white-striped matelot sweater, transformed on Gigi Hadid into a couture masterwork of fan-pleated organza, worn with matelot pants worked in finely tucked jersey like one of Madame Grès’s fabled goddess gowns. That Gaultier camouflage was reimagined as a fall of autumn leaves exquisitely embroidered in silk thread on a tulle man’s shirt or in origami whorls of silk taffeta on a jumpsuit, and Hermès scarves were sliced up and interwoven to make a swirling skirt. Meanwhile a bridal couple—each wearing half an immaculate white jacket, hers over a short skirt, his over a long—showed what a brilliant tailor Gaultier is and reminded us that he has been playing with fluid gender identity on his runway since it was societally taboo.

Rossy de Palma was dressed as a black Spanish fan with her hair twisted into pretzels to suggest a mantilla; Dita Von Teese struck a pose in a corset dress composed of pink satin belts; Béatrice Dalle strutted in vampirical black net and patent leather and threw her lit cigarette on the runway (a photographer leaned in to pick it up and puffed it to its finish); Coco Rocha gave a dazzlingly high-flying Irish dance in a swirling kilt of chiffon, cut velvet, and feathers; Anna Cleveland rocked a skirt made of natural sponges; DJ Kiddy Smile sashayed in kimono silks; and Amanda Lear (in a beaded sweater micromini and legs for days) descended the stairs in the arms of two strapping boy toys. Am I painting the picture? We laughed, we cried, the standing ovation went on forever.

“That was so fun!” chorused Viktor and Rolf. And this, from Dries: “That’s going out with a bang!” 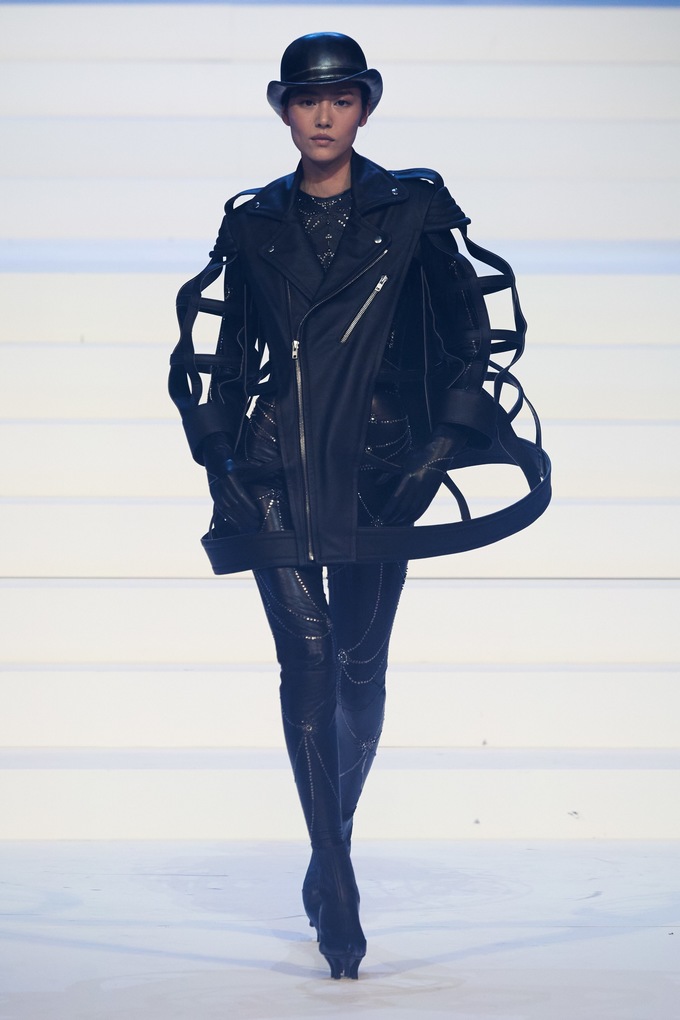 It’s Not What You Wear, It’s Where ON YOU You Wear It!